Racism, Trauma, and the Air We Breathe

The only thing more tragic than the gruesome and unjust murder of George Floyd is the fact that the brutality he experienced as an African American man living in the United States was and is not unique. 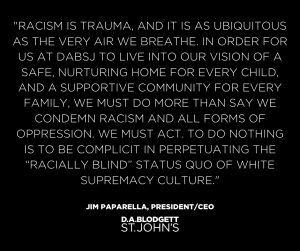 The only thing more tragic than the gruesome and unjust murder of George Floyd is the fact that the brutality he experienced as an African American man living in the United States was and is not unique. Mr. Floyd’s horrific and senseless death, including his gasping pleas for mercy, “I can’t breathe!” would have just been another statistic had it not been caught on camera for the world to see.

Mr. Floyd’s dying words, echoing those of Eric Gardner, “I can’t breathe,” are now reverberating across the country, as communities gather to demonstrate and protest, demanding justice. While justice for George Floyd and his family is imperative, true justice must address the systemic racism that makes the dehumanization of African Americans and other persons of color a normative experience in this country.

It is easy to watch the news about the George Floyd case and the rioting across the country and dismiss it as a singular or rare occurrence. It’s another matter to understand that we are witnessing yet another chapter in the very large volume of the history of racism in the United States. Understanding that police brutality, disproportionate death rates due to COVID-19, incarceration rates of African Americans that surpass the numbers of those held in captivity as slaves, disproportionate maternal and infant mortality rates in communities of color, and yes, disproportionate representation of black and Latinx children and families in foster care, are indisputable indicators of a system of inequality.

Racism is trauma, and it is as ubiquitous as the very air we breathe. In order for us at DABSJ to live into our vision of a safe, nurturing home for every child, and a supportive community for every family, we must do more than say we condemn racism and all forms of oppression. We must act. To do nothing is to be complicit in perpetuating the “racially blind” status quo of white supremacy culture.  Justice requires us to listen closely and carefully to the statement true for millions of Americans, “I can’t breathe,” and ask ourselves, individually and as an organization, what can we do to affect change within and beyond our organization so that the breath of life, and the dignity and opportunity that comes with it, is a right, not a luxury.