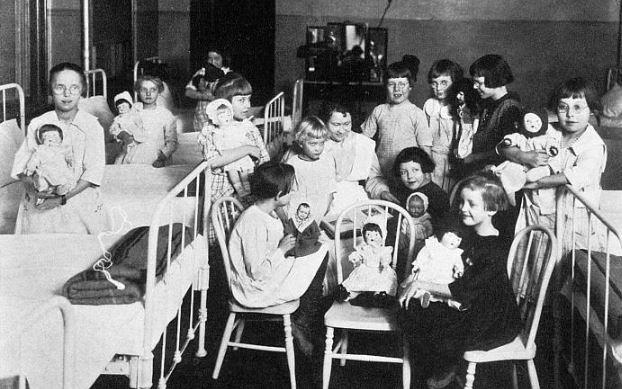 Our History
Preventing abuse and neglect since 1887.

In the 1880s, Grand Rapids was a bustling commercial center fueled by the lumber industry. But left out of the city’s prosperity was an alarming number of children made homeless as epidemics of typhus, diphtheria, scarlet fever, and cholera swept through West Michigan.

Children begged in the streets of the city, malnourished and very sick. Leading citizens organized to rescue them. As early as 1882 Bishop Henry Richter was exhorting the Catholic community to build an orphanage. With a $60,000 bequest from a wealthy lumberman named John Clancy in 1884, plans were soon underway. 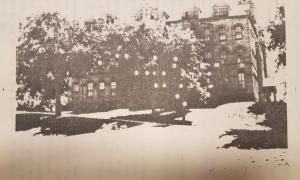 St. John's Home in 1889. Meanwhile, Jennie Blodgett and Emily Clark were planning the Children’s Aid Society, with the blessing (and funds) from Jennie’s husband, Delos Abiel (“D.A.”) Blodgett. In 1887, the Blodgett - Clark project commenced at 42 Lafayette. Before long, it would be called the D.A. Blodgett Home for Children.

Up the street, on the corner of Lafayette and Leonard, the Bishop’s “St. John’s Orphan Asylum” was under construction. The four-story “castle” opened in 1889.

Over the next thirty years, both ventures expanded to accommodate wave after wave of orphans. In 1908, the Blodgetts built a stately building on Cherry Street where children of all faiths and backgrounds received expert physical care and schooling. But both the Blodgetts and the Dominican Sisters of St. John’s soon realized the limitations of custodial care. The Blodgetts spoke for both agencies when they observed, “[Our children] have everything they need, except a family.”

A Need For Homes.

By the early 1920’s, foster programs were established at both agencies. For the rest of the century, advancements in medicine and greater acceptance of foster care and adoption brought an end to traditional orphanages. By 1946, more that 60 percent of children served by St. John’s Home were in foster care. This program would become the Catholic Service Bureau, and later, Catholic Social Services. 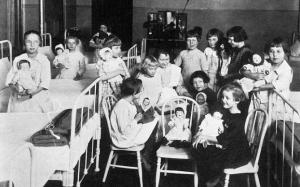 In the years following World War II, ominous societal changes created difficult new challenges for home placement programs. The modern “orphan” was now likely to be a victim of family violence, abuse, and neglect fueled by a rise in alcoholism and drug use. Some children needed much more than a new family could provide.

A Merger Meant To Be.

In early 2009, leaders at St. John’s Home and D.A. Blodgett for Children began discussing the merits of a merger. When this unification became official on January 1, 2010, eighteen different programs and services were brought together.

Out of respect for the founding fathers and mothers and thousands of donors and volunteers, the historic names were preserved as the agency was renamed “D.A. Blodgett-St. John’s.” As one of Michigan’s largest child welfare agencies, the Organization will continue to serve thousands of children and families in our community.

Ultimately the creation of D.A. Blodgett – St. John’s was formed and continues today to meet needs of children and families in the community. Supporting all children and all families, from all walks of life. Providing, Homes and Hope for Children!

An Expansion of Services.

D.A. Blodgett for Children began offering new prevention services to vulnerable families. Mentoring programs in particular Big Brothers Big Sisters, were added starting in 1965. Since then, more than a dozen specialized foster and adoption programs, community-based programs have been added. St. John’s Home began focusing exclusively on treating young survivors of abuse in its residential treatment program. After relocating to a new campus on Knapp Street in 1992.

Upon the death of Delos A. Blodgett in 1908, a colleague wrote, “The extent of his quiet and unheralded charities will never be known, except to the many who were beneficiaries of his kindness. His tender and sympathetic interest in the little homeless waifs…was beautifully shown in the magnificent building erected which will ever stand as a monument to his generous impulses.”

Bishop Richter’s died in 1916, but through his life, he spoke out on behalf of the community’s children. His words still resonate. “The obligation to help the poor is written in your hearts. Day after day children will be brought here who will be taught their first prayers. God will not answer them in person, but He has delegated you, my friends, to see that they are properly clothed and fed.” Those words still ring true today as this merged agency continues to provide for our community’s most vulnerable children.