Every Day is Filled With Joy: Adopting Amid a Pandemic

Sara and Barnabus Corder share their story of adopting Joshua. 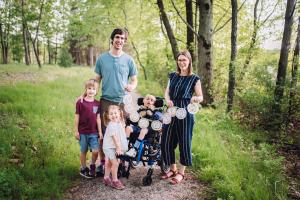 Before they were married, Sara and Barnabus prayed for a child, but their prayers may have been different than most. They prayed for a child who was already born into this world, one that needed a home and family.

Barnabus is a pediatric nurse and Sara was a special education teacher before becoming a full-time homeschooling mom. Those two specialties allow the couple to advocate and care for children who have medical, developmental, and educational needs.

After the Corder’s became licensed foster parents through D.A. Blodgett – St. John’s (DABSJ), someone from the medical community called and said they knew of a child living in Michigan that needed a family. The child they called about had quadriplegic cerebral palsy and epilepsy. He was born with a significant amount of water in his brain, and he also has severe scarring of his retinas and is almost completely blind. During his last surgery they also discovered he is 100% deaf.

With their backgrounds and desire to grow their family, they immediately said they would be open to having the child move in with them.  “We felt somehow without even meeting him that this child needed to be in our family,” said Sara. His name was Joshua and he moved in with the family on May 17, 2019.

Eleven months later he was adopted and an official member of the Corder Family. Due to COVID-19, the family finalized the adoption through the mail. While not ideal, the most important part, Joshua becoming part of their forever family, was complete. It was a joyful experience especially with so much turmoil happening in the world.

Sara said that being quarantined at home was actually really nice for their family. She already homeschooled her two biological children, ages 6 and 3. Having Joshua home meant he didn't get sick and that they had a couple months of reprieve from hospital appointments, inpatient stays, surgeries, and illnesses caused from students at Joshua’s school. “It's nice to slow down,” Sara said. “Of course we are very much looking forward to the threat of the virus being diminished and life returning to normal.”

One of the challenges they have faced is finding childcare for their two other children for all of Joshua’s needs. “We couldn't be parents of additional children without the unending and complete support from my mother-in-law, Kathy. She is the woman that raised 10 kids, and her sole job now is to support her children and grandchildren. Currently her two eldest sons are foster parents through DABSJ,” Sara said. “She is the most dependable person I have ever met. Fully willing to change diapers, remodel kitchens, build guest rooms out of open space, come over for family game night, and spend hours talking with the children, genuinely interested in who they are.”

Some of their happiest memories as a family are with the grandparents.  Sara said that walking into the Detroit Zoo right behind her dad pushing Joshua’s wheelchair, knowing he isn't embarrassed, but fully embraces their son and family is meaningful. And with their other grandpa pushing the wheelchair through a field searching for monarch caterpillars together. “It's sweet that they recognize all that we do and they desire to help,” Sara said.

Sara and Barnabus think every day is filled with joy and look forward to spending each day together as a family.