For most of us, tough life decisions come later in life, usually during our adult years. However, Michael didn’t have the luxury of waiting. 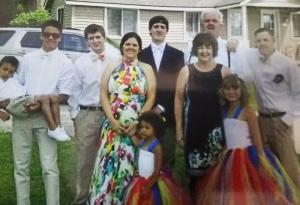 For most of us, tough life decisions come later in life, usually during our adult years. However, Michael didn’t have the luxury of waiting. When he was eight years old, he knew his mother had too many problems and was unable to take care of him. As difficult as it was, he decided he needed a family that could take care of him, so he asked his caseworker if he could move into a foster home. Over the next five years, Michael lived in several foster homes. None seemed a good fit for him.

Then he arrived at the home of Bryon and Dione Antes. He wasn’t sure what to expect. They were nice people, but how long would this home last for him?

Bryon and Dione had already raised four of their own children. They also brought in three other children, Jenna, Anastasia, and Antonio, first as foster children; then they were adopted and part of the Antes’ forever family. When asked how that happened, Bryon explained, “When we brought them into our family, we thought it was for just a year until their family situations improved. But they didn’t improve, so they were eligible for adoption. By then, Dione and I were hooked and did the natural thing—we adopted them.”

When Michael arrived, it could have been a different story. After all, he was thirteen years old. The other adopted children were much younger. It’s one thing to adopt a child you have known for most of his or her life; it’s an entirely different matter with a young teenager. “We all had our challenges,” Dione says, “because kids who have had their lives disrupted and have moved from one home to another have to learn to trust. But we were able to work them through them with the help of Michael’s caseworker and therapist at D.A. Blodgett – St. John’s. Foster and adoptive parents shouldn’t assume that it will all be easy. It’s not, but it’s been worth it.”

After two years in the Antes’ family, Michael had made up his mind—this was the family he needed if he was going to be “healthy and happy,” as he put it. He was adopted and now calls Dione and Bryon his mother and father.

While much has changed over the past five years, some things haven’t. Just like he did when he was eight years old, Michael made important decisions about what he wanted to do with his life. He has been interested in flying and wanted to be a pilot. However, when he learned he had a heart condition that would not allow him to fly airplanes, he decided to become an air traffic controller instead—a career he is pursuing at Western Michigan University. While not the same as flying, it’s been great for Michael. When asked what advice he would give to other young people who cannot grow up with their biological parents, Michael said, “Don’t feel bad about taking care of yourself. As much as you may want to take care of your parents, you can’t do that for them. You need to be in a family that loves you if you want to be healthy yourself. You deserve it.”