The Best Joy You Can Experience: Teen Brothers Adopted Amid Pandemic

Jason and Kelly Noling welcome Harley and Koda into their family. 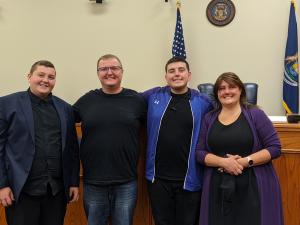 Jason and Kelly Noling both came from very big families. Their parents had multiple siblings, and there were always plenty of aunts, uncles, cousins, and grandkids around. When it came time to start their own family, they had discussions on whether or not they wanted to move forward with natural childbirth or adoption. They decided at this point of their lives, adoption was the best way to go.

“I’ve always wanted to be able to help a child out, and know that I was making their lives better than where they came from,” said Jason Noling. “So that is pretty much what solidified our decision.”

They connected with D.A. Blodgett – St. John’s in 2019 to start this process. One night, Kelly was scrolling through the Michigan Adoption Resource Exchange (MARE) looking at all of the children currently waiting to be adopted in Michigan. This is where she stumbled across 14-year-old Harley’s picture.

“Her hands flew up, and she gasped. When I asked what happened, she said that he was the one,” said Jason. “I went over to the computer and looked at the photo, and said okay, let’s get this started!”

While Jason shared this moment of their story, Harley, now 15, smiled and laughed to himself. When asked how he felt hearing this, he replied, “I’ve heard this story about a hundred times, but I love it.” 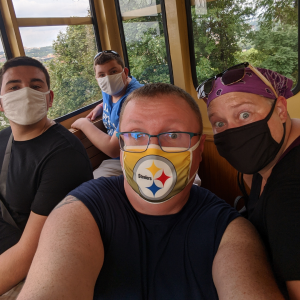 before moving in with them. One thing they learned about Harley was how much he loved basketball and how good he was at it, so he thought they could play a game.

“I neglected to think that at the time, I was 35 years old and I don’t have the same kind of lung capacity as I used to have. I tried my best to keep up with him and I did, but I was very sore and very out of breath at the end of that [visit],” said Jason. “Even after all of that I drove the entire way home with a smile on my face. I knew that this was just going to be one thing in the growing list of things that we could do together. And I knew that this was just going to be a great fit. I knew it from the beginning.”

Harley remembers exactly how he felt when he first met Jason and Kelly. “Really happy since I’ve been in foster care, like, all my life,” said Harley. “I thought – these could be the people!”

Harley was placed with the Noling’s on October 28, 2019, and his adoption was finalized July 15, 2020. Because of COVID-19, the court hearing was held over Zoom. However, they made the best of the situation, and had family that they knew tested negative of COVID-19 gather at the house to celebrate. There were balloons, presents, cake, and Harley even wore his favorite red suit. The whole family wore red since it was Harley’s favorite color. “I could breathe a sigh of relief. I could finally call him my son,” said Jason.

After Harley was placed with the Noling’s they continued sibling visits with Harley’s older brother, Koda. They expressed interest in adopting the 17-year-old, and asked their worker at DABSJ if this was possible to do before Koda turned 18. Their worker received the adoption case on August 11, 2020.

The state timeline goal for adoption is normally ten months, but their case worker engaged all of the different parties of the adoption process to make sure that all were on board with prioritizing his adoption. Koda was placed with Jason and Kelly Noling on October 6, 2020 and his adoption was finalized on October 20, just two weeks before his 18th birthday!

“We were able to keep their existing family and add it to ours,” said Jason. “The only family that Harley has really known is his brother and if we were to break up that bond, there would be a lot less joyous moments.”

Now that Harley and Koda are officially part of the family, the Noling’s are excited to do as many fun things as they can - together. Harley and Koda haven’t been able to travel outside of Michigan, and Kelly and Jason have family spread across a few states. They’re excited to travel more once it’s safe. They also love to spend time outdoors, go camping, watch movies, cook, and play video games together. Jason says he is even looking forward to helping Harley with his school work.

“I think Harley and Koda have been the best things to happen to me and Kelly,” said Jason. “To be able to have two sons whom I love with every ounce of my heart, to be able to do things with and teach, and go through ups and downs of life with − I think that’s probably the best joy that one person can experience.”