Living the Mission of DABSJ 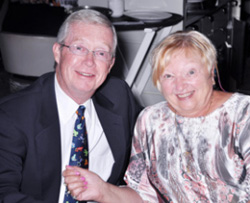 Bill and Carolyn Hineline tend to stick with things. They have been married for fifty-one years and have lived in West Michigan since 1967. Bill took a job with Law, Weathers and Richardson and 48 years later he still works there. Carolyn retired from teaching in 2005.

Bill and Carolyn’s involvement with DABSJ runs deep. “We adopted our two children through the agency — Mike and Marsy. This was certainly the most life-changing part of our involvement. They were wonderful kids and now they’re wonderful parents. Mike lives in Atlanta with his wife and two children. Marsy lives in Aurora, Illinois with her husband and her son. She also has three stepchildren and seven grandchildren, making us great grandparents!”

How the Hineline’s have helped:

“We can’t say enough about the blessings we have received since beginning our involvement with DABSJ nearly half a century ago, said the Hinelines.”

DABSJ is grateful for supporters like Bill and Carolyn who are helping meet the needs of vulnerable children and families well into the future.

“Throughout our experiences with this agency, we have been deeply impressed by the dedication, character, and enthusiasm of the staff and leadership. There is hope within this agency and the services it offers.”