Joe didn’t know much about his grandmother’s past until after she passed away last December. He knew she was a strong person and raised five great children—including his mother. But, as so often happens when a family member passes away, new details of the family’s history were shared. 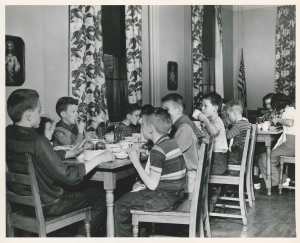 It was then that he learned that, for three years during the Great Depression, she and two of her sisters lived at St. John’s Home. Joe explains more about his family: “Her mother—my great-grandmother—was married at age fourteen when she was living in Poland. She and her sixteen-year-old husband immigrated to America when she was seventeen, and by the time she was twenty-two, she had six children.

Three years later, her husband left her. She made ends meet by working as a custodian at the McKay Towers Building. She didn’t make enough to raise her children on her own, so she placed three of them at St. John’s Home. My grandmother was nine years old, and she lived there for three years.” Joe goes on to explain that, despite the family’s challenges, things improved: “When things improved for my great-grandmother, she brought all of her kids back home to live with her again. And by all accounts, she did a great job. My grandmother was a very strong and caring person. She was a great mother to my mom. In fact, all of her children ended up doing well.” When asked about why he decided to start supporting St. John’s Home, Joe says that it’s pretty simple:

“Some people call it the ‘butterfly effect’ or ‘paying it forward,’ meaning that even the smallest acts of kindness can have a dramatic effect over time. Look at my family. All of my grandmother’s children were happy, strong and successful. And their kids—including myself—have benefited from that act of kindness extended to my great-grandmother and her children when they really needed help so many decades ago. I want to be someone who does the same.”

Joe and his family have done just that over the past several years. Not only have they provided financial support, they also invited the kids to camp out on their property on the shores of Lake Michigan. It gave Joe and his family a chance to actually meet a few of the kids that they have helped. “It was great,” Joe says. “While it was obvious to me that they had been through a lot in their short lives, they were great. I think that it is so important, to do things like that. After all, every kid needs a chance. Who knows what might happen?” Joe adds. “Look at my family. My sister and her husband now own the McKay Towers Building. You can’t make this stuff up.”