Abby is a 7-year-old little girl who had a provisional diagnosis of Autism. She began receiving services over a year ago. She was having significant behavior problems at school, in her kindergarten class. 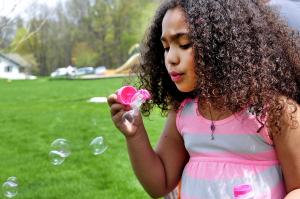 Abby is a 7-year-old little girl who had a provisional diagnosis of Autism. She began receiving services over a year ago.  She was having significant behavior problems at school, in her kindergarten class. Her parents were receiving multiple phone calls a day from the school to report what she was doing, which was very frustrating and produced a lot of anxiety.  Both parents have disabilities, as well.  A DABSJ Supports Coordinator attended school meetings with the parents, to advocate for Abby and assist the parents with the process.  Abby was so aggressive toward peers and adults, and so disruptive in the classroom that she was being sent home from school multiple times per month.  Other times she was sent to the office to sit.  DABSJ’s Family Support Services team met with multiple educational staff to problem solve.

They asked for educational evaluations for special education, advocated for Abby’s parents, asked the school to reduce the multiple daily calls to one call per day, and encouraged the school to implement a behavior plan. Testing determined that Abby had a mild development disability and she was transferred to a special education classroom. She couldn’t understand the work in the kindergarten class and was acting out.  Almost immediately after she was transferred to the smaller class with more support the behaviors decreased.  Now that she has been in the classroom for the past year, her behaviors are well managed within the classroom, and she loves to go to school. Abby was referred for CLS (Community Living Services) from DABSJ, to help her with her goals within the home to learn some basic skills such as counting, color identification, etc.  She has shown much improvement, her parents are very pleased with her school placement and her progress, and she really LOVES to go to school now!