Drew is an 11-year-old boy who began services with FSS in 2014. He was diagnosed with Autism, Mood Disorder and ADHD. 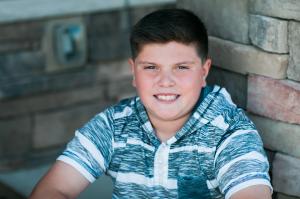 Drew is an 11-year-old boy who began services with FSS in 2014. He was diagnosed with Autism, Mood Disorder and ADHD. His mom was being called several times a week by his school to pick him up due to frequent meltdowns. Drew was also aggressive towards others at home. He had a difficult time going out in the community, particularly when there were unexpected changes of plans.

He soon began participating in Supports Coordination, CLS and Respite services, all at D.A. Blodgett – St. John’s. He began ABA (Applied Behavior Analysis) therapy in 2017 in place of CLS (Community Living Services). During his time in Family Support Services, he has made steady progress on his goal areas. Last summer, Drew was able to attend an overnight camp for a week without an issue and he has not had a call from his school in over a year now. Drew has also started participating in after school activities such as his school’s robotics team and the lacrosse team. While he still complains when plans change, he has been able to regularly go on vacations and out in the community with his family!