Thomas would not engage with others and needed prompting to even say hi. 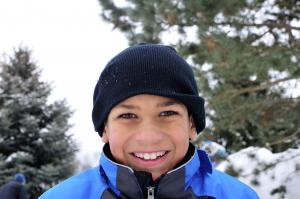 Thomas is a 10-year-old boy diagnosed with Autism Spectrum Disorder. He began receiving services with Family Support Services in 2017. He struggles with communication, social skills and self-care. He was dependent on communicating his wants/needs only with prompts from others, and even with prompts, he struggled with answering what he needed. Thomas would not engage with others and needed prompting to even say hi. He began receiving Community Living Supports in February 2018 and ABA (Applied Behavior Analysis) therapy in March 2018.

Since receiving these services, his communication and social skills have increased significantly. His mother shared that he has been talking a lot more and at times without prompts. He will greet others without prompting and recently greeted his supports coordinator by name. He is now able to sit in church, which they never used to be able to do, and he will shake people’s hands. Thomas’ mom reports that there is still progress to be made but she is very happy with how far he has come and the support getting him to this point.