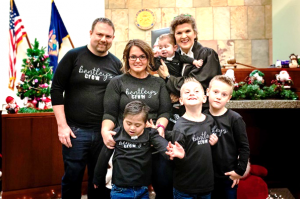 After getting married and learning that pregnancy was a challenge, they considered foster care. When they mentioned this, a family friend sent them a photo of a boy who was featured on the MARE website and waiting for his forever home. They immediately knew that they wanted him to be their son. It was this little boy, Jaxson, which started their foster care and adoption journey. Jaxson was adopted by the McNeil’s at the age of three, and is now 11.

In September of 2018, Carrie and Jason met a little boy who would need ongoing medical support. Although they fostered and adopted medically fragile infants and children in the past, including their son Jaxson, a diagnosis can look completely different in two children. It was important to the McNeil’s that they meet the child and speak with medical professionals prior to placement to ensure that the needs weren’t greater than they could handle. After their first meeting they said “yes” to placement of Bentley, and in October 2018 he was placed in their home.

Bentley, age two, was diagnosed with a variety of medical conditions, including Hypoplastic Left Heart Syndrome and stage 3 kidney disease, which required medical training through Helen DeVos Children’s Hospital upon placement. Due to his heart and kidney conditions, Bentley needs a transplant of both organs. However, because of his heart condition he doesn’t qualify for a kidney transplant, and due to his bad kidneys, he doesn’t qualify for a heart transplant. Despite these challenges, Bentley is “the happiest little boy,” as described by his mom. He has been thriving developmentally since moving in with the McNeil family; still his heart function has not improved.

Bentley underwent his second stage of repair for his left heart syndrome just months after his adoption was finalized. He did great and is recovering well! The journey for him and his family is not over. His kidneys suffered an acute injury from surgery, which was expected, so he is currently receiving dialysis to help recover.

We’re thankful for families like the McNeil’s who step up and care for some of our most vulnerable youth, like Bentley, by providing safety and support in challenging times.