Saying Goodbye to My Children

Relinquishing the rights to your children is one of the most heartbreaking experiences a mother can go through. But giving her kids the best life possible was Nicole’s priority. 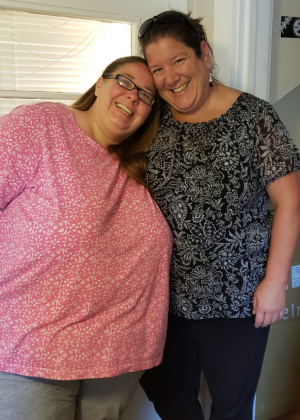 Relinquishing the rights to your children is one of the most heartbreaking experiences a mother can go through. But giving her kids the best life possible was Nicole’s priority. She had 3 boys, ages 2 to 7, who she loves more than anything. She became familiar with DABSJ when her youngest was 2. She said, “He didn’t act like a typical 2-year-old but I wasn’t sure why.” It was at that point he was diagnosed with sensory processing disorder and speech delays. They were referred to DABSJ Early Childhood Attachment program for therapy. From there, he was diagnosed with autism and received services from DABSJ Family Support Services, where they help with developmental disabilities.

During this time, Dad was involved with the family but, as Nicole put it, was “not a good guy.” He was verbally and physically abusive to her in front of her kids. She remembers one of her sons telling Daddy that he was not nice to Mommy. Her oldest son felt it was his responsibility to keep his mommy safe and that broke Nicole’s heart. The boys would get nervous if they heard someone come up the stairs; they were worried Daddy was coming home. One day at school, her oldest son told the teacher about the abuse and CPS was called to the home. It was at that point the boys were removed and placed into foster care. The dad was sent to jail.

Nicole was once again involved with the agency but this time because her kids were in foster care. After years of therapy while her kids were in care, she came to the conclusion she couldn’t give her kids the life they deserved. She made the decision to relinquish the rights to her 3 children. It was heartbreaking, but knowing they would be safe, happy, and loved was worth it. The day she signed the papers to release her rights, she was so upset her hand was shaking and she could barely sign the documents. But she came to terms knowing her kids were safe and signed the papers.

Nicole wants her boys to know how much she loves them. She made this choice to keep them safe. She never gave up and always did her best, but knew she could not give her kids the life they deserved. On the last day she saw her boys, she gave them each a scrapbook filled with happy memories, lots of baby pictures and special notes. She gave them each a stuffed animal and took family photos one last time. Nicole believes it’s very important her kids know who they were before they were in foster care. “In over 18 years I have never had a client go to these measures to give her kids memories and keepsakes. Nicole went above and beyond to show her kids how much she loved them,” said Jody Smith, her case worker. “I don’t want them ever to forget me,” Nicole said.

With tears in her eyes, Nicole said she never wanted her kids to go through this. She did the very best she could, but there were just certain things she didn’t grasp, preventing her from being the mom her kids needed.

Her favorite memory with her sons was traveling by train to the Shedd Aquarium. They were so excited to ride the train, she recalled, and they loved looking at the sharks.

Nicole knows their foster mom will take great care of the boys and that gives her a lot of comfort. Her hope for her kids is for them to be happy and to accomplish whatever they want to do in life. Nicole is ready to start a new chapter in life. She is moving to a new city and looks forward to working on herself. She wants to settle into a new normal. But most of all, she feels great relief that her kids are safe, happy, and loved—after all, that is all any mom wants.