Temporary in Our Home, Forever in Our Hearts

Stephanie & Rich truly had fostering in their heart. 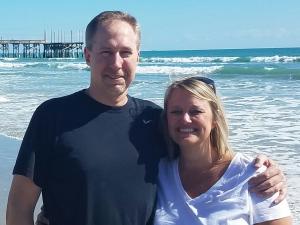 Stephanie and Rich truly had fostering in their heart. Rich's parents were foster parents for nearly 40 years and fostered 108 newborn babies. This influence had the pair thinking about foster care or adoption early in their marriage. The couple raised three biological children and often looked into fostering, but the timing was not right. Once their nest was close to being empty, they felt they had more to offer. It was at that time they reached out to D.A. Blodgett - St. John's (DABSJ) to begin the foster care licensing process.

Embracing the philosophy that children should be with their biological families when appropriate is something Stephanie and Rich believed in. They were also aware of the ever-growing need for foster homes in our community, especially for older children and sibling groups. That is when their foster care journey started and a sibling group of two teens and an eight-year-old were placed in their home.

The three children entered foster care due to poor living conditions at home. Sadly, they endured medical and educational neglect and witnessed physical abuse. At first, only two of the siblings were placed with Stephanie and Rich. But knowing this, they took the extra steps to increase their license capacity, and were able to foster all three in their home so the siblings could be together.

The couple is often asked about fostering older children opposed to babies, "Though it may be more difficult to care for older children because of trauma or busy school schedules, we felt that we had the experience and ability to handle it. Additionally, the foster parent training we received from DABSJ was outstanding! We also felt that older kids would benefit from knowing our older children who are college-aged or married. We knew our kids could be positive role models, plus we could all enjoy similar activities together. For us, infants or very young children would have required a big lifestyle change," said Stephanie.

The children's biological parents struggled with some cognitive limitations that made parenting challenging at times, but genuinely loved their children and wanted to parent them. They engaged in treatment immediately and consistently attended parent visitations and meetings. As they biological parents received the help they needed, Stephanie and Rich supported them every step of the way. This allowed the children to witness a positive relationship with mutual respect. After the parents completed all the necessary treatment and therapy, all three children were reunited with their biological parents after nine months in foster care.

Many wonder what it's like emotionally to have children in your home for so long and then reunified with their biological parents. Stephanie said, "You need to prepare yourself emotionally by continually reminding yourself of the end goal: reunification. We went into the placement knowing the goal is always to reunite children with their parents." She continued to say that while the kids were with them, they were always positive and as encouraging as possible about their eventual return home. "We talked with them in the short term, not looking further ahead than the next court date. In their case, the kids were very verbal about their desire to be home with mom and dad."

Stephanie and Rich understood the longer they were in their home, the more they became attached. Just like their own children, they wanted what would make them happy. Fortunately, in their case, mom and dad were working hard to make reunification possible. "Once the kids returned home, there was definitely a period of time where we worried about them and missed them. For nine months, we had spent every moment with them, and suddenly, we had to readjust to it being just the two of us again. We would often look at each other and say, "I miss the kids!'" Thankfully, the birth parents wanted them to remain involved, and they still keep in touch today.

"Although it's true that foster parenting can be very rewarding, your real motive should be to provide a safe and nurturing environment for children and prepare them for what's ahead. We highly suggest that if you have the capacity and ability to foster, that you do it. There are kids out there who desperately need you. We've thought many times that if everyone who could foster children did so for just a year or so, that there would never be a child in need," said Stephanie and Rich.