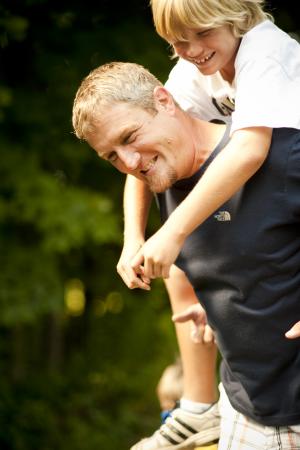 Mr. E. takes me to his house. We go skateboarding on his street sometimes. He has three sons that I hang out with. I’m the youngest at my house, but at his house, I’m the oldest brother. He has a trampoline we play on. He took me to a Whitecaps game. He’s teaching me to play guitar. He’s a good Big Brother because he wants to spend time and he likes to skateboard. I think Mr. E. likes being a Big Brother because he’s nice to me. He bought me a new shirt.”

Matt, or “Mr. E” is a math aid in the Forest Hills Schools. He met Jason in one of his classes and arranged with D.A. Blodgett - St. John’s to become his Big Brother. They have been matched for 10 months. He is married and has three young sons.

“I felt he needed a male role model. The expression on his face when I go to pick him up is just priceless.

At first, I thought I needed to entertain him every week, but I found that what he loves the most is coming over to my house and just hanging out with our family. The last time I visited him, I took my four-year-old son who was eyeing Jason’s matchbox cars. Jason immediately offered to share them. He’s just an adorable kid who wants so much to be part of a family.