This is a letter written by Ryan, former mentee, over 20 years ago nominating his mentor, Ron, for the Governor’s Outstanding Mentor of the Year Award. Ron ended up winning, and meeting Gov. Granholm. 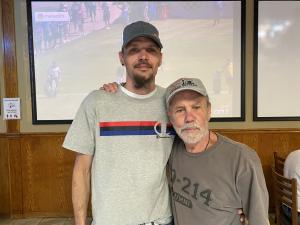 This is a letter written by Ryan, former mentee, over 20 years ago nominating his mentor, Ron, for the Governor’s Outstanding Mentor of the Year Award. Ron ended up winning, and meeting Gov. Granholm.

My name is Ryan Tanner. I am writing to explain why I think Ron French should be nominated for the Outstanding Mentor of the year award. If it were my choice, I would nominate him for father of the year because truly that's what he was, a father more than a brother.

Growing up being me wasn't easy. My father signed his rights off when I was 8 years old; the last time I’ve ever seen my father. My mom remarried and everything was fine except my stepfather made it a point to let me know I wasn't his son. To make a long story short, I was at a point where I didn't feel important.  I didn't know who I was and I was positive that I wasn't going to amount to anything. I never had big expectations for my life. 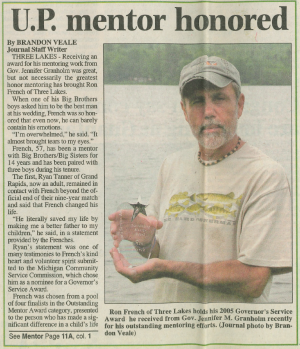 Then I met Ron.  Being with Ron, I learned how I wanted my family to be.  I remember wishing I were Ron’s son. He showed me the value of family by the way he treated his kids.  I saw the way his son and daughter looked up to him. He taught me teamwork and family values and he showed me he cared. He put me in sports, which taught me how to be sociable.  I was very insecure before I met Ron. I barely kept my head up around authority. He showed me how to be strong and he kept me out of trouble by putting me in sports.  I remember playing ball, looking around seeing other kids with their parents coaching them to be better, cheering them on, telling them good luck, and when the game was over patting them on the back for good game, then taking their sons out for pizza. I never had that before Ron.  I never had a life with a dad. I never knew how to love a dad until Ron came in my life.  Ron was all that I didn't have, and I didn't know that until he came in my life.  I couldn't tell you where I'd be if it weren't for him. He literally saved my life by making me a better father to my children, he made me a better person, he put a head on my shoulders and he taught me to be a man. I am thankful, my soon-to-be wife is thankful and my children someday will be thankful. He not only changed my life for the good but also my family’s by making me such a good person.

Ron was that man on the sidelines letting me know someone is there for me, watching me, telling me "keep your eyes on the ball” and that's what he did for me.  He was there when nobody else was, and for that, I’m going to be there to teach my kids and someday their kids.

Ron deserves more than a reward. Because of people like him, the world is a better place one kid at a time.  If you teach love you will eventually show someone else how to love and on and on to a better world...

Ron definitely has a place in heaven.  There is nothing I could give to repay what he has done. His heart is too big.  He deserves this reward and more, but Ron would probably say he doesn't deserve it. It is long overdue and it's time somebody pats Ron on the back...  JOB WELL DONE... .I LOVE THAT MAN.  HE IS MY FATHER, MY FRIEND, MY BIG BROTHER.