“Horses change lives. They give our young people confidence and self-esteem. They provide peace and tranquility to troubled souls. They give us hope!” -Toni Robinson 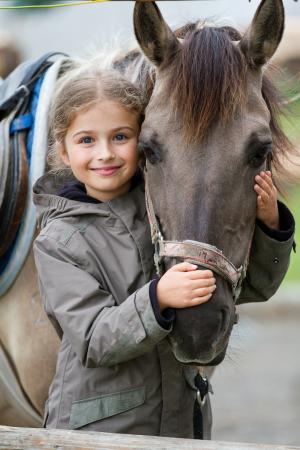 The blonde, short-haired young teen girl hung back at the van. The rest of the kids filed into the barn. There she stood in the driveway, holding onto the van. At the time, I didn’t know much of her story, nor did it matter, because she wasn’t even coming close to the barn. The group continued on, and we had some amazing moments with the other kids connecting with the horses and with each other. However, there she stood, alone and apart, for two entire sessions. Staff told me she was new. I wanted to stop everything and go to her, ask questions, try to make a connection, but it was not the time. On the third session, she hung back as usual, and I acknowledged her with a nod from the barn door. She hung onto my gaze with a longing that was surely felt. The group carried on, and later that session, I walked by a horse named Bo’s stall. As if she had been teleported, the girl was in the stall, braiding his long mane. I said nothing, handing her a hairbrush as I walked by.

At the next session, with only a few words spoken, she followed me to the horse brushes. As she reached down to select a brush, her sleeve rolled back enough for me to see the deep and numerous scars of her cutting. They looked so painful. On this particular day, the other kids had worked up to actually riding their horses. The students had been learning how to groom, lead and tack their horses in order to ride. I asked the girl if she would like to ride. “Sure,” she said. I told her we would have to work closely together to get her caught up to the other kids so she could ride. She was willing, and a path of communication was slowly opening up.

I showed her the tasks needed to prep Bo for their ride. She listened and helped with each task. As we saddled Bo, she began to look nervous. I asked her if she wanted to continue, and she said yes, but told me she was nervous because she hadn’t ridden a horse before. I reassured her that if she wanted to ride, I would walk next to her every step of the way. She put her foot in the stirrup and, with guidance, swung her other leg over. At that moment, she became a little frantic, saying, “I can’t do this, I can’t do this!” I got right next to her. I asked why she thought she couldn’t ride a horse, because she was already riding! A big smile blossomed over her face, and she had a look of wonder and accomplishment. I reassured her that I would be there every step of the way, and, with that, we began walking around the horse arena.

During the first lap, the girl was hunched over, clutching Bo’s mane. As we continued, I asked her how long she’d been at D.A. Blodgett - St. John’s. This one question opened up a floodgate of her talking about herself, her past and the new residential house she was living in. I Interrupted only to give her riding tips: heels down, sit tall, feel Bo’s movement. The three of us walked: I listened, Bo did his job, and the girl talked. A great connection had been made. By the end of the ride, she was sitting tall in the saddle and appeared comfortable. We paused in the center of the arena. I thanked her. She looked at me a little puzzled, asking why I was thanking her. I told her, “Thank you for trusting me and Bo, and opening up to share so much of yourself with me today.” Again, that big smile bloomed across her face, and she told me, “I like it here!” - By Kat Welton, LLMSW, Director at The Barn for Equine Therapy

THE BARN FOR EQUINE LEARNING is a nonprofit organization that strives to connect people and horses to bring about positive change. The founders of The Barn have always believed in the healing and teaching power of horses, and it has long been their dream to share that power with others. Set back on 40 wooded acres in Lowell, it is removed from the sounds and busyness of life, offering a learning environment that makes it easy to stay present. Students from our residential program attend twice a month. For more information, visit www.thebarnforequinelearning.com.