Samuel's family situation was more than chaotic - it was dangerous. 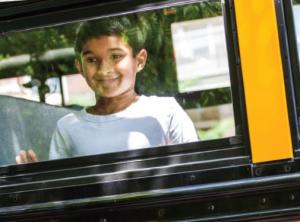 Samuel's family situation was more than chaotic - it was dangerous. The adults in his life were out of control. For an eight-year-old, this was terrifying. Having known only chaos, he fought against the family rules and was placed in a foster home, but he had no idea of what to do within a safe, loving home.

Samuel acted out in ways that eventually lead the foster parents to ask that he be moved. That's when he arrived at our Kids First Emergency Shelter. While at the emergency shelter, Samuel was comforted by the fact the school buses showed up at the same time every day. This was a type of security and consistency he had not experienced before.

Soon, Samuel began to alert the other kids a few minutes before their bus would show up. Eventually, he learned the bus schedule by heart. One day the other kids started calling him, "the Bus Boy." Samuel didn't mind. After all, he loved buses. The staff at Kids First began to see something else in Samuel. For all his initial resistance to the structure, he began to thrive, to the point where he has moved on and is living on the other side of our campus in the residential program. But he is still "the Bus Boy," reminding his friends when their bus is about to arrive and embracing the routines and structure he once resisted.